What I've been working on lately

I'm setting up a new industrial sewing machine in my room.

Nevermind, it's not new. And it's not in my room yet. It has been in my parents house for nearly 2 years, collecting dust in the corner of their living room. I acquired it in December 2009 and it is only now that I have it set up and running. I just got back from their house. I have been going over there once or twice a week for the past couple months to work on the machine.

I feel absolutely victorious for finally getting the damn thing to work. I started working on it with no idea what I was doing. I've never considered myself to be a mechanically inclined person, but I somehow managed to put it all together and fix it up with the random tools I have somehow ended up with. I still have about half a dozen more parts to buy for it, but the thing is finally functioning and it can totally sew the animal print hoodies that I am always making.

Here it is. This picture was taken before I got it to work. Not pictured: the foot pedal, lamp, and most of the thread tree. 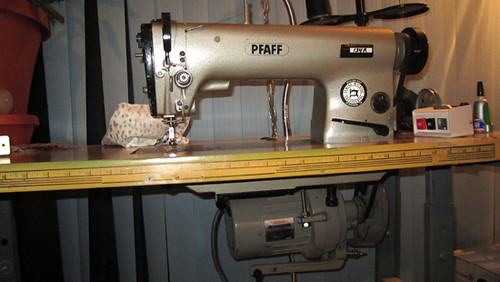 My mom is a little annoyed about it taking up space in her living room for so long, so she's been decorating it with flowerpots and various crap.

Problem #1: the motor that was installed on the machine was a 220 volt motor with a 5-prong plug. As I work out of the back room of an old Victorian house rather than in an actual factory, I have nowhere to plug the thing in. So I bought a new (used) motor. The thing is ridiculously heavy, so my dad helped me install it to the sewing machine table.

Problem #2: the new (used) motor was sized differently than the original motor. The v-belt connecting the motor to the machine was way too long. So I had to buy a new v-belt. I accidentally bought one that was too short, so I had to buy 2 new v-belts. I'm an idiot.

Problem #3: the motor didn't have a push-button switch to turn it on. So I had to buy one of those too.

Problem #4: finally got the switch installed, and the right v-belt on the motor. I turn on the motor, start sewing, AND THE DAMN THING WAS SEWING BACKWARDS. I ended up taking a picture of the motor switch wiring and calling up my uncle (an electrician/engineer/something or other) to get directions on how to change the wiring so that it would run the right way. My dad also helped me with this. There was a moment of suspense when we turned on the machine, because we had no idea if it was going to short out their power or explode or whatever.

Other assorted problems: the bobbin case was broken, had to buy a new one. The new one wouldn't work until I removed on of the extra parts on it. The machine also has a major oil leak, which I might just have to make do with. And all the oil inside it looks rotten. I took off the oil plate and was showered in black gunk. The clear plastic case over the oil well is cracked and leaking over the front of the machine, too.

The lamp that is installed on the table also won't plug into the new motor. Wrong sized outlet. I plugged it into the wall outlet instead, and the light-bulb went out within a fraction of a second. I also need to buy rubber feet for the machine so it can fit properly into the table. And buy a new needle plate, because the one on it has been mangled pretty bad.

Did I mention that it showered my hands in rotten oil?

THIS MACHINE HATES ME.

The only luck I ran into was that I was able to find a manual for it online. And it may be the best manual for an industrial machine that I have ever seen. Even if I can't understand half of what it's talking about, I'm glad that I have the information.

I still have about half a dozen more parts to screw back on to the machine. Once that's all done, I'll transport it to my sewing room and buy lots of special sewing machine feet so I'll be able to do things like top-stitching at full speed and with complete accuracy. I like the speed of the machine. I was afraid that it would be too fast to handle, but it seems to be only a bit faster than the home sewing machine that I've been using for the past 10 years.

So, I can't wait to use it. Unless of course the damn thing decides to randomly stop working as soon as we manage to haul it up the 3 flights of stairs to my room. Did I mention how fucking heavy the whole thing is? Nothing would surprise me at this point.

Oh, and maybe I should explain why I am going through all this trouble of setting up an industrial machine instead of just buying a new home machine. The volume of sewing that I do is too much for regular home machines. The one I'm using now probably won't be able to handle my animal print hoodies for another year, and I want to give it back to my mom. I've been "borrowing" it for a long time now! Industrial machines are also supposed to be able to handle fabric better than home machines. Hopefully this one isn't too old and janky to do its job. It seems like a decent machine, once you get around all the broken parts!
Posted by Annie at 9:40 PM