Last year I moved a used industrial sewing machine into my room to replace the domestic sewing machine that I used for about nine years. It took me several weeks to get accustomed to the speed and handling of the industrial machine. Even though it's old and leaking oil, I FUCKING LOVE THIS THING. 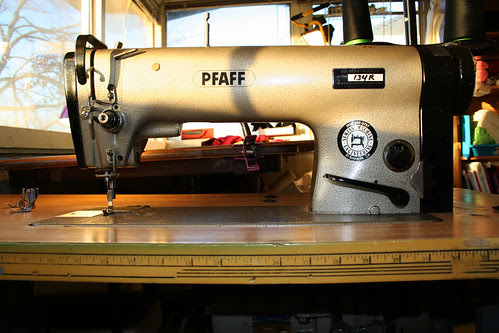 Using the industrial machine makes me wish I had switched to industrial YEARS ago. I had been using my mom's nice Elna machine, which worked the best out of any domestic machine I have ever used, but this old industrial works twice as well as the Elna! It's amazing!

One of its features is a knee pad that lifts the presser foot when you want to start and stop sewing. At first I thought the knee pad would be uncomfortable and hard to get used to, but after adjusting it a couple times I am hardly even conscious that I am using it. It speeds up sewing time just a bit and feels like second nature already. 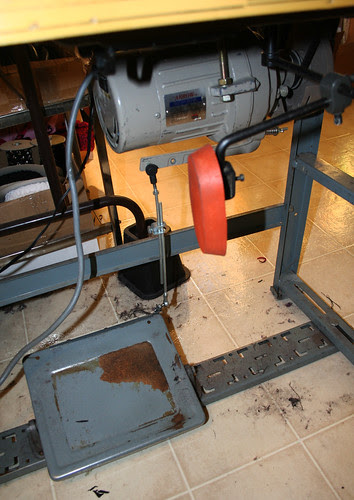 Please excuse my filthy floor, that's all fabric lint! I vacuum my sewing room frequently, but velboa faux fur produces an enormous amount of fabric dust when I cut into it.

Another awesome feature is the bobbin winder that is located on the side of the sewing machine head. With domestic machines, you have to partially un-thread the machine and stop sewing completely while the machine winds thread around a new bobbin. With industrial machines, you just put an empty bobbin in the winder and it winds up while you sew with a new full bobbin. Switching the bobbins is easy and barely wastes any time. 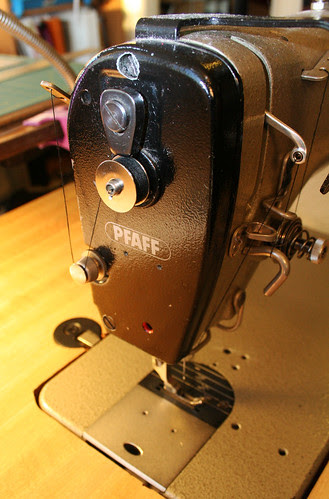 These machines can also be used with a variety of special presser feet and attachments to make it easier to sew a particular seam. I bought five different presser feet to see which ones could make my sewing easier. They ranged from $2.50 to $6.50 each. Shown below from left to right are two compensating feet, a shirring foot, a medium width zipper foot and a regular foot. A narrow width zipper foot that isn't shown was on the machine when I took the picture (but it does show up in the above picture). The compensating feet are for accurate top-stitching. The shirring foot doesn't work too well with fabric of average thickness, but it made some pretty tight gathers in some thin tulle that I used when I was experimenting with it. The screw at the back of the foot adjusts how much gathering you need. 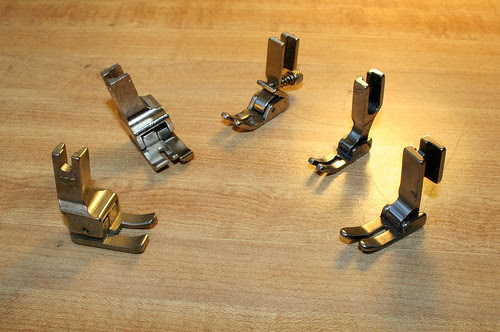 Below is a picture of the entire machine, including the thread tree. It has two spools of thread on it so that you can sew while you wind a new bobbin. I also keep thread snips and a small flathead screwdriver handy for changing the presser foot. The only annoying thing about this machine is that I know that the newer models of industrial machines have even more awesome features. Even though I've gone a huge step forward in my sewing speed and ability, there's still room for improvement! The machine that I described in this previous blog post talks about a current top-of-the-line industrial machine. 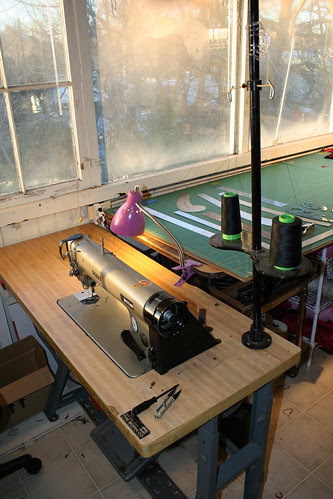 I also recently bought some new patternmaking rulers. When I first took patternmaking at the local community college, I bought an 18" C-Thru ruler and some curved C-Thru rulers, as well as a metal L-square and a long curved metal ruler. A couple weeks ago I bought a longer T-Square (the 36" long ruler on the far left), a hip curve (the metal ruler on the right) and an armsceye ruler (the small curved metal ruler at the top). These rulers can get pricey. I paid over $20 for the longest metal ruler. But after years of dealing with too-short rulers, it was totally worth it. It's difficult to cut patterns out on the fabric grainline if your pattern grainline doesn't run the entire length of the pattern piece, and you need a ruler that is longer than your pattern piece to mark a completely accurate grainline. I could probably use an even longer ruler than the 36", but that purchase will have to wait for now.

What I really need is a bigger cutting table, but I'll save that story for later. 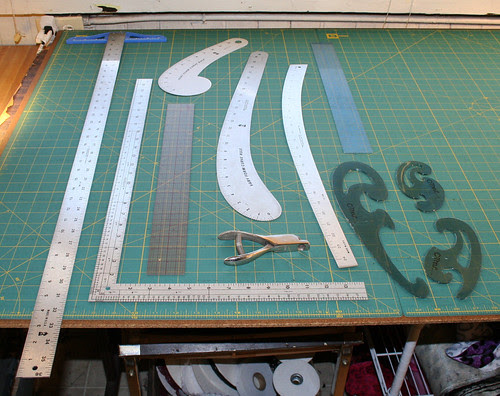 If there are home sewers reading this who are interested in altering their patterns, I would recommend purchasing the 18" C-Thru rulers and the curved C-Thru rulers. They sell them at office supply and craft stores, and they are less than $5 each. The 18" C-Thru ruler is great for changing seam allowances and making small changes to pattern measurements. If you start to really get into patternmaking then you'll need the other types of rulers.

The other tool on the table in this picture is a pattern notcher. It marks a tiny slit into the pattern for matching up seamlines. Home sewing patterns typically have notches that are shaped as triangles going outside the pattern edge, but those are really annoying to cut out. The pattern notcher makes marking notches easier.

The last new thing that I bought recently is a small roll of patternmaking paper. This stuff has a grid on it that should make it easy to make pattern pieces symmetrical. It works well for drafting, but for permanent patterns I need some thick manila cardstock paper. I still have some left over from the free paper stash that I got from my school. (It WAS free, I swear!) 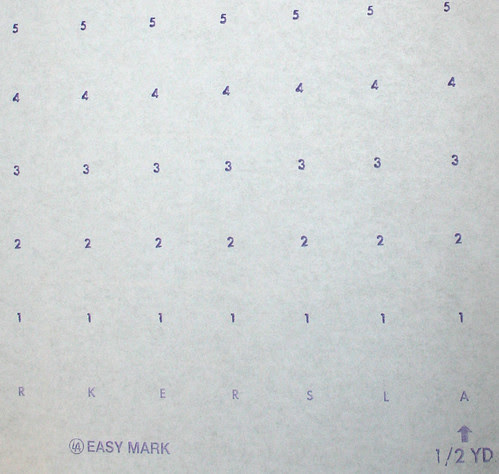 If any fellow seamstresses are interested in this stuff, I purchased the presser feet from South Star Supply and the rest of the stuff from Atlas Levy. (The presser feet only work for industrial machines, not the domestic machines that most people are used to.) If you are as much as a sewing nerd as I am, you will end up going through every product page on those websites, amazed at how many random sewing tools and machines there are. The more I learn, the more I realize I don't know!

Some other tools I keep handy are different sizes of screwdrivers and wrenches for adjusting settings, cleaning, or changing out parts on my industrial sewing machines. A can of gas duster keeps too much lint from building up on the parts, and regular oiling keeps the sewing machines from destroying themselves. Atlas Levy sells sewing machine oil by the gallon, but since I don't go through it very fast I bought the smaller pint-sized bottle.

I plan on posting pictures of my entire sewing room later on. I'm kind of amazed at how much stuff I have accumulated over the years. Forget the tools, you should see my book collection!
Posted by Annie at 6:35 PM