Flat patternmaking: using a previously made pattern to create new patterns while working on a drafting table.

Draping: cutting and pinning fabric to a dress form in order to create a new design. The fabric is removed from the dress form and traced on to pattern paper to make a usable pattern. I am not very experienced in draping so I will not discuss it in this series.

Block: a basic pattern that fits well that can be altered to make many different styles. For example, I have altered my basic hoodie block into many other hoodie styles: a hoodie with inset pockets, a princess lined hoodie, a fully lined hoodie, etc.

Grading: making a finished pattern in different sizes. This is complicated and requires a lot of math. I can grade simple patterns by myself, but for complicated patterns I create my own grading specifications and then pay a professional pattern grader to do the work. For example, for my tank top pattern I gave the pattern grader a size medium to start out with and then had her grade it into sizes XS, S, L, and XL. I told the pattern grader which bust/waist/hip measurements that each size was supposed to have, and then she did the complicated grading work and sent back the completed pattern in the different sizes I wanted.

Computer Patternmaking/CAD/computer-aided design: using a specialized patternmaking computer program to create and grade new patterns. These programs are expensive (I think usually $5,000 to $20,000) and they also require a digitizer and a pattern plotter to use. (A digitizer is used to transfer a paper pattern into the computer program and a plotter will print out the finished pattern.) 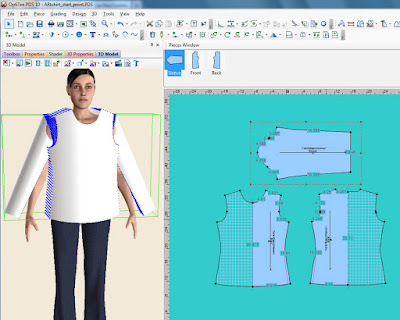 The photo above is a screenshot of an assignment I did at school. You can learn computer patternmaking in fashion schools and some companies will rent out a student version of the program. The CAD programs I have learned in school are Gerber (super expensive) and Optitex (more affordable). I loved the classes and I wish I could use Optitex for all of my patterns. To use these programs you need to know the basics of patternmaking because they will not make the patterns for you.

Grain: the direction in which fabric is woven or knitted. You need to cut your patterns to line up with the grain or else the fabric will stretch in random places and not hang the way you intended. Some fabrics have a grain that is easy to spot, like the fabric below: 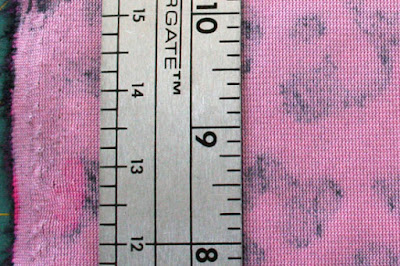 The lengthwise grain (parallel with the selvedge, or edge of fabric) is called the warp. It is usually more stable than the crosswise grain, which means that it does not stretch or move around as much. It also tends to shrink more than the crosswise grain when you sew with a type of fabric that shrinks in the wash. Most clothing is cut with the hemline perpendicular to the warp.

Bias: a diagonal line slanting across the warp and weft grains. On woven fabrics the bias is the direction that will usually have the most stretch. You can cut garments at the true bias (a 45 degree angle from the warp and the weft) and completely change the way that the garment hangs. Bias cut is a popular way to make evening-wear because it can make woven satin fabric stretch and cling in an elegant way. If you want to look for examples of what you can do with bias cut, check out dresses by Madeleine Vionnet. She was the first to popularize bias cut dresses.

The photo below shows a piece of fabric with the selvedge running along the left side and the different grain directions labeled. 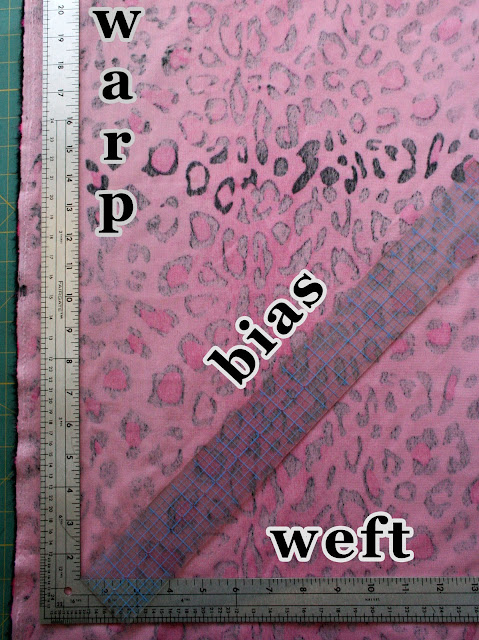 Pattern pieces are usually cut with the grainline running parallel to the selvedge (warp).

Special patternmaking tools can be expensive but they are not totally necessary when you start out. If you are willing to splurge on a full set of tools, Atlas-Levy sells a great set of them: Fashion Designer's Carryall

60 Inch Flexible Tape Measure: These are available in longer lengths but I find that the longer ones are bulky and annoying. Use it for:

18 inch C-Thru Ruler: THESE ARE AWESOME!

L-Square: you need one for making right angles. Use it for: 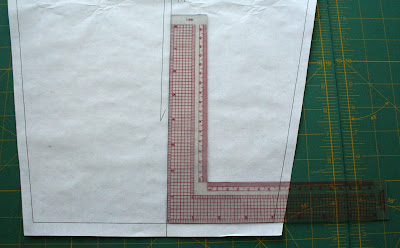 36+ inch ruler or yardstick: a good rule is to have at least one ruler that is longer than your longest pattern piece. This is important for tracing out accurate grain-lines. Professional patternmakers own many rulers that are much longer than 36 inches. Currently my longest pattern piece is my leggings pattern, which is under 36 inches so I do not need anything longer.
The 36" long ruler is shown on the far left of this picture: 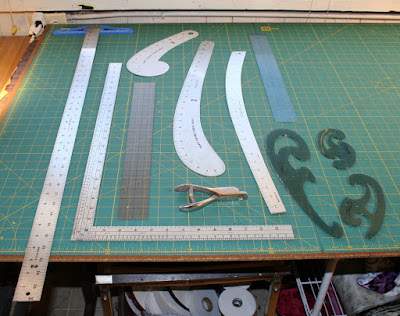 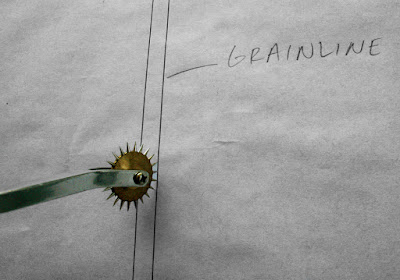 Pattern Notcher: cut notches (slits) into the seam allowances of your pattern (instead of cutting around the triangles on store-bought patterns). Notches are used to match up seams and to mark placement of design details like pleats and gathers. 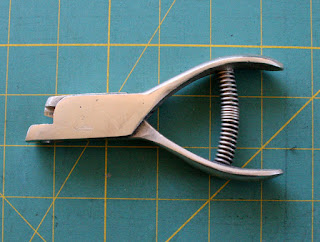 Drafting paper: this is the thin paper that you use to make first drafts of your patterns. Once the pattern is finished and perfected, you can transfer it to oaktag (also called manila) pattern paper. Oaktag paper is thicker and will last much longer than thin drafting paper. 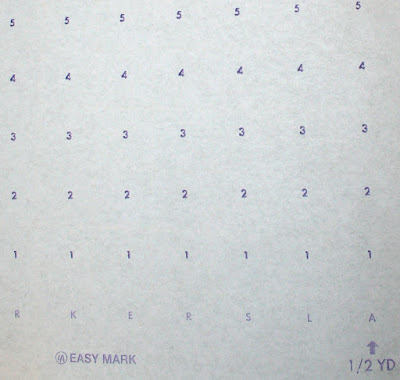 I spent a long time on this patternmaking guide, so please don't steal my information and put it on your site! If you want to reproduce it somewhere else on the web please email me first at info@derangeddesigns.com.
Posted by Annie at 6:45 PM