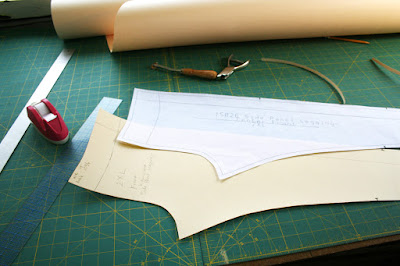 Recognize the brand names Burda, Butterick, McCall's, and Simplicity? If so then you are probably familiar with the frustrations of using store-bought patterns. Unfortunately, store bought patterns are usually full of mistakes. Sometimes seams don’t match up perfectly, or the directions don’t make sense, or even the design itself is drafted wrong. If you make something from a store bought pattern and it ends up looking like shit, don’t blame yourself. Blame the lazy manufacturers of the pattern. Real patterns made in the garment industry cost hundreds of dollars. Store bought patterns cost only a couple bucks (when you buy them on sale, of course) so they are far from perfect.

I’m not saying that you should avoid buying them, though! Store-bought patterns can be useful when you are learning patternmaking. Buy a simple pattern that is easy to sew up and then practice altering it. Check it for mistakes and then research how to fix them yourself.
There are also independent patternmakers that sell their own patterns over the internet. They probably charge a little more than the fabric stores and they send you the pattern to download and print out yourself. Watch out for these sellers, too! I can’t speak for all of them, but I know that some will sell patterns that have just as many mistakes as the ones you buy at the fabric store. If possible, find online reviews of the pattern before purchasing it.
Posted by Annie at 6:58 PM