Now that I have been in business for 10 years, I think it's time to write a post about some of my favorite and some of my most embarrassing clothing designs. This post will focus on designs from my first three years because that is where you can find my most "WTF IS THAT?!" creations.

A quick explanation of my sewing history and the way that I come up with new designs: I starting sewing daily when I was 13, and then started selling my designs on eBay three years later. I was lucky enough to start out when there were very few people selling DIY clothing on the internet, so I had few competitors and was able to make a small income from the business immediately.

My design process back then wasn't really a design process at all. I went straight from having an idea to sewing it without doing any sketching or planning. This led to some very erratic results. The finished garment would be too weird or ill-fitting to wear, and then I would alter it until I liked it. Or I would just slap it up on eBay and see what happened. To my amazement, nearly everything I made back then sold for at least the minimum bid. Those were the days!

Ok, here we go. Starting off with the WTF: 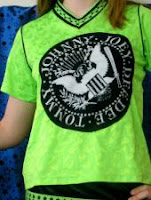 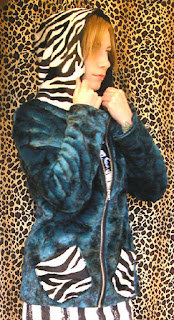 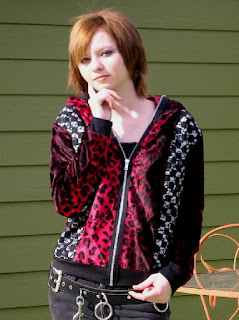 Faux Fur Disasters: If I had only used black faux fur instead of blue that jacket on the left would have been bearable. On the right is one of the first things that my friend Laura ever modeled for me. Red leopard, checkered fabric, and something weird over the checkered fabric, maybe lace? Laura said it reminded her of a pimp coat. Not what I was aiming for!

If something doesn't turn out right the first time, just add ruffles/studs/patches/lacing/fabric paint till it looks GREAT! 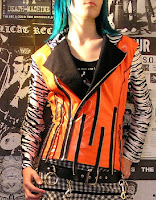 Pointless zippers and polyurethane. Who the fuck actually bought these shiny monstrosities? At least my hair was always awesome back then.

That's enough embarassment for now, so here are some of my favorite designs from 2005-2008: 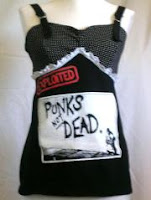 Some of my better band shirt alterations (guess I ran out of soccer jerseys!) 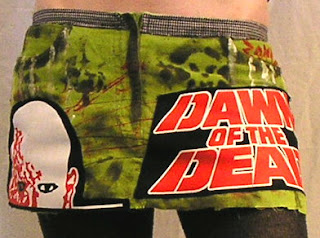 Zombie mini skirt! I love how the zombie's head is right at the edge of the hem. I'm also starting to realize just how much lime green fabric I used back then, which I cannot explain. 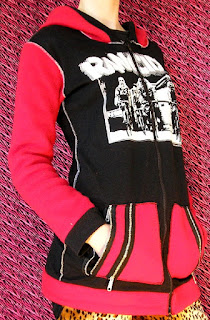 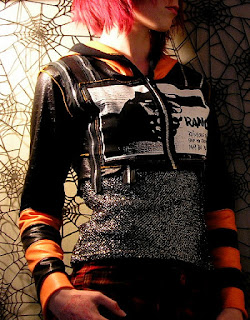 Two different Rancid hoodies: when used in moderation, pointless zippers and orange polyurethane can turn out alright (at least by my weird aesthetic standards) 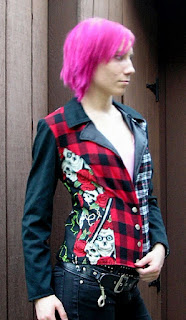 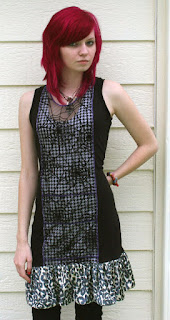 Here are a few redeeming photos of myself and Laura, once we got a little better at modeling. The jacket and dress were from my first fashion show. The jacket was fully lined and it had actual functioning zipper pockets, which was pretty damn impressive for me back then. To be honest, I still hate sewing that type of pocket!

I hope you enjoyed my journey back into my teenage sewing years. If you have recently started sewing, I recommend practicing your skills on cheap fabric and thrift store clothing so it doesn't matter if you make mistakes. Don't forget to photograph all of your early creations and experiments so you can laugh at yourself in the future!
Posted by Annie at 9:58 AM